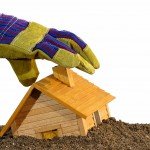 KANSAS CITY, Mo. – In less than 24 hours, some homes in the Falcon Falls neighborhood off Bedford in Kansas City will come down.

The families living in the homes evacuated a couple of weeks ago, but on Thursday, their next-door neighbors got their notice.

“I’ve never seen anything like this. They’re actually falling apart,” Aaron, who declined to give his last name, said.

The new duplexes, located on the 7000 block of North Bedford Avenue and built in 2011, are sinking further and further from the front side of the homes and even around the back.

“It’s scary,” Aaron said. “Even the decks are falling off the house themselves.”

Aaron lives next door and he got the notice to vacate from the city.

“All of our belongings are in the house. We have nowhere to go,” he said.

His friends lived in the units now scheduled for demolition and said they felt the warning signs.

“She said while she was sleeping she heard some cracking noises and she was just figuring that the house was settling, but then she was told that maintenance was telling her the foundation was giving way,” Aaron said.

41 Action News contacted Falcon Falls and Vice President of Operations Bernie Onelio said they are doing everything they can for the tenants.

“We feel bad about it. We wish it wouldn’t have happened,” Onelio said.

He said the builder and developer aren’t to blame. Instead, it is weathered shale deep underneath.

Falcon Falls said they have offered to make arrangements for Aaron and his family like they did for these other families — but Aaron says that’s not the case anymore.

The demolition is expected to start Friday morning.

For even more evidence of our commitment to saving your home, check out our YouTube Channel.  You’ll see our work ethic, our expertise, and our desire to help every homeowner that comes our way!