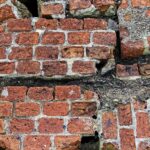 EARTHQUAKE DAMAGED FOUNDATIONS –CONTENTS: How to Evaluate and Diagnose Complex Combinations of Foundation Movement Cracks, Bends, Leans, or Shifts in Foundation Walls. Different causes of foundation leaning, bulging, cracking, creeping, tilting, sliding, or other movements, what they look like, how to fix them. CALL 816-521-8915 or www.kingpiers.com

TYPES OF DAMAGE CAUSED BY EARTHQUAKES

“People were frightened everywhere.  Many ran out of doors when the ground shook and found walking difficult.  Windows cracked.  Glassware broke.  Books and vases toppled from shelves.  Pictures fell from walls.  Furniture moved and overturned.  Plaster and masonry cracked.  The sounds of birds were hushed as the trees and bushes waved their branches with eerie rustling sounds at the passing of each event..”  (Stewart and Knox)

…A perfect description of the events that take place during an earthquake, and the types of damage that may result.  However, earthquakes can also have effects that are much more profound.

Essentially, the damage caused by earthquakes depends on the characteristics of the ground in that area.  For example, earthquake vibrations last longer and are of greater wave amplitudes in unconsolidated surface material, whereas bedrock areas receive fewer effects.  The worst damage from an earthquake occurs in densely populated, urban areas, where structures are not built to withstand intense shaking.  (Goldstein, “Earthquakes Museum“)
In fact, two of the most popular places for intense earthquake activity are California and Japan.  California is the most populous state in the union, and it has the most earthquakes.  In this area, as the tectonic plates move concerning each other along the faults, they slip or move laterally past one another.  On the other hand, Japan, also known as “The World’s Earthquake Factory,” is one of the most earthquake-prone countries in the world.  Japan has 30 times the population density as the United States; therefore, the seismic activity in this location proves much more disastrous.  In this area of the world, as the tectonic plates move concerning each other along the faults, they converge, or bump into one another, with one plate usually sliding beneath the other in the subduction zone.  (Stewart and Knox)
Ultimately, however, both California and Japan are areas of the world that have experienced tremendous amounts of damage due to extensive and frequent seismic activity, or earthquakes.  This is true because both locations are located on the “Ring of Fire,” which loops around the Pacific Basin.  This “Ring of Fire” is related to the movement of huge tectonic plates, or blocks of the earth’s crust, that bump and slide past each other like giant ice flows.  The graphic below highlights the different areas that are located in this dangerous zone.  (Iacopi)

The greatest landslide concentration occurs in weak, poorly cemented, geologically young rock and soil.  As a result of their weakness, the vibrations of earthquakes rapidly erode these materials.  Landslides include shallow rockfalls and rockslides, as well as disrupted, chaotic jumbles of soil, rock, and vegetal debris that topple downhill.  The greatest danger emanating from landslides includes their ability to damage and destroy homes, block roads and streams, disrupt pipes, water mains, sewers, and power lines, damage oil and gas production facilities, and generate massive dust clouds.

This picture illustrates a landslide in California.  Landslides are a universal feature of California earthquake scenarios, where very little can be done to prevent this type of damage because of the fractured nature of rocks and slopes within the fault zones.  (Iacopi)

Some examples of sites that contained earthquake-induced landslide activity include the San Gabriel Mountains, Kobe, Japan, and Northridge, CA.

***TSUNAMIS:  Japanese name for “Harbor wave,” or seismic sea wave.
Alone with his destiny, a man stands transfixed before a world of water (55-foot killer wave) about to engulf him. (Walker)
Tsunamis are the result of a sudden vertical offset in the ocean floor, which can indeed be triggered by intense earthquakes.  Essentially, tsunamis are creatures of the open ocean or trains of great waves that can travel long distances across the sea.  As a tsunami approaches the shore, the water depth decreases, the front of the wave slows down, and the wave grows dramatically in height and surges unexpectedly onto the land.  Truthfully, tsunamis can carry a considerable amount of energy because they possess strong currents that cause massive erosion of the coastline, as well as bulldoze towns and drown unsuspecting, curious people.  When earthquakes occur, these dark “walls” of water suddenly flood coastal areas like California and Japan without warning.  For example, in 1896, an earthquake off of the coast of Japan generated an enormous tsunami with waves up to 100 feet high.  This “wall of water” killed 22,000 people and destroyed entire villages.

***FIRES:  result from broken or severed electrical and gas lines.

Fires that begin as a result of earthquake activity are often uncontrollable and can cause the most damage.  Flammable materials or debris released from the earthquake feed the flames of the fire, thus causing it to spread out of control.  Water mains are broken as a result of the powerful earthquake vibrations, therefore, no water is available for firefighters to put out the flames and rescue the people.  For example, in the 1906 earthquake in San Francisco, California, a fire caused the most damage because the broken water mains and blocked roads allowed the flames to swell out of control.  (Gilfond)

This photo depicts the horrific scene in Fukui, Japan after a severe earthquake hit.  As the picture illustrates, an uncontrollable fire unleashed lethal flames that consumed the helpless town.  (Walker)
***MUDSLIDES:  slip down mountain slopes, sweep main valley floors, and bury habitations below.

Mudslides often occur a few hours after the extraordinarily widespread slope mass movements (landslides) take place.  Moreover, they are induced by the collapse of several temporary natural dams built by the large and high-density landslides.  Several people lose their lives during these catastrophic events.  For example, in the 1994, Northridge California earthquake, there were a significant amount of landslides that induced mudslide activity, and many people died as a result.

***LIQUEFACTION:  soils and unconsolidated materials containing abundant water are turned into fluid-like masses that are not capable of supporting buildings.

During an earthquake with intense seismic activity, loose, moist soil is shaken, and the individual grains separate, turning the earth into a soft, fluid slurry that is capable of swallowing entire buildings.  As a result of the seismic vibrations, the soil loses strength and behaves as a viscous or thick fluid, rather than as a solid mass.  Essentially, in the case of liquefaction, the ground behaves much like quicksand and can prove to be very dangerous and sometimes deadly.  For example, liquefaction occurred in the 1906 earthquake in San Francisco, California, and also in the 1995 earthquake in Kobe, Japan.  (“Earthquake Hazards Program,” http://earthquake.usgs.gov/faq/effects.html)

The graphic shown above illustrates how the clay-free soil deposits, consisting mostly of sands and silts, can flow much like quicksand in the event of a strong earthquake.  (Iacopi)

STRUCTURAL DAMAGE:
***BUILDINGS COLLAPSE:  seismic vibrations that occur during earthquakes cause buildings to sway, which may knock them off of their foundations and cause severe damage or destruction.  People can be trapped in collapsed buildings or under rubble that collapses into the street.

Kobe, Japan (January 17th, 1995):  The number of buildings destroyed by the earthquake exceeded 100,000, or approximately one in five buildings in the strongly shaken area.  An additional 80,000 buildings were badly damaged.  The large numbers of damaged traditional-style Japanese residences and small, traditional commercial buildings of three stories or less account for a great deal of the damage.  In sections where these buildings were concentrated in the outlying areas of Kobe, entire blocks of collapsed buildings were common.  The fires following the earthquake also destroyed several thousands of buildings.

The picture shown above provides a dismal image of the amount of structural damage and destruction that was caused by an earthquake in Fukui, Japan.  (Walker)

Ultimately, in the event of an earthquake, structural damage depends on FIVE very important components.

**The strength of the earthquake waves that reach the surface

**The duration of the motion

***ROADWAYS COLLAPSE:  when an earthquake strikes, freeways, bridges, and roads buckle under the pressure of the intense seismic activity.

***DEATHS.people become trapped under the rubble and debris that is generated from the earthquake.  Falling structures and flying glass and other objects strike unsuspecting people.

This is the type of damage that leads to the worst casualties.  In fact, the worst thing to do during an earthquake is to rush out into the street.  The danger from being hit by falling glass and debris is many times greater in front of the building than inside.  For example, in the 1989 Loma Prieta earthquake, the streets of San Francisco’s financial district were covered by broken glass, and people were buried under the facade of a brick building that fell forward into the street.