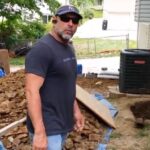 Are you looking for a Non-Invasive Footing Solution?  King Piers has the answers!

Join the long list of Happy Customers who were HAPPY that they chose the King Piers Team to Repair They’re Foundation. King Piers LLC is a “GREEN CONTRACTOR” The King Pier System is an Innovative non-obstructive way to raise & stabilize a SINKING FOOTING permanently! You can find Videos and Pictures of many King Piers LLC’s projects all over Missouri and Kansas at www.facebook.com King Piers Facebook Page as well as on our YouTube Channel.

Check out this article on BUILDING a STRONG FOOTING!!

The most important thing when building a home is sighting the foundation, and no matter what type of foundation you end up using, they all begin the same way — with the footings. A Non-Invasive Footing Solution is always what you should look for!

What Is a Footing?

A footing is typically concrete and typically reinforced with steel. The footing is the bottom part of the foundation. It’s the base — sometimes called a “spread footing” because it’s spread wide and it spreads the vertical loads that are coming down in the building.

In a foundation that’s a slab (all slabs, in general, have a 2′ footing that goes around the perimeter of the building.

How Will You Know Where to Put the Footings?

The site surveyor will lay out exactly where they should be. What they do is give the visual location of how the footer is going to be and where all the pins will be set, which are painted to give a visual outline of which way the forms are running and what part of the wall that pin is particularly pointing to.

By locating where the footings will go, the site surveyor is an invaluable member of the home-building team. Another important member at this phase is your excavation contractor, who is a subcontractor that your builder will hire to dig the footings, as well as the rest of the foundation.

To do this, the excavation contractor will use a variety of heavy machines, including excavation machinery that can rotate in all directions. This is a great machine that can clear brush, dig rain drains — and it’s an excellent footer machine.

How deep the excavation contractor needs to dig will depend upon the soil. The depth is usually designated by the structural engineer. He’ll tell you, based on the strength of the soil. The width gets into spreading those loads, and if the soil isn’t really that strong, then what you’ll need typically is a bigger footer to help spread the load out a little bit more.

Pouring concrete directly into a trench is a common way to create a footing, but some houses will need what is called a “stem wall,” which is the portion of the foundation that sits above the ground. It’s created by pouring concrete into wood forms or by laying concrete blocks.

Note: The part that has a form is usually the stem wall. Below grade doesn’t need to be formed, which is just poured right directly into the trench.

Before pouring the concrete the subcontractor will usually need to install rebar into the forms, which is done to add strength to the concrete. Rebar is a term for reinforcing bar, and it’s basically steel — or steel rods to be exact. It’s used whenever you’re trying to utilize concrete and hold it together and to allow different loads and weights to be transferred throughout the entire wall.

After the foundation team has installed the rebar into the footing cavities, most cities will require an inspection. This is just to make sure that the footing installing proceeds according to city code requirements. The person who checks the installation is another important member of your home-building team — the local building inspector.

Ron Henshaw — manager of code administration in Cranberry Township, Pa. — says there are several things the building inspectors are looking for:

-Number one is the footer depth. The requirement is 10″ thick.

-Verify that the footer location is following what the approved plan was and that’s for zoning purposes. The building inspector verifies along with the builder that the house has been set in the proper location.

-Verify that the rebar has been installed properly and has been tied together appropriately. Is the rebar the right size in other words.

DIY Home-Building Alert: Missing inspections can cause construction delays, which will in turn cost more money.

Every step of the way, your contractor will call for a sign-off on different stages of building and electrical, plumbing, grading, pouring, foundations, and every other aspect of homebuilding. To avoid any construction delays, make sure that your builder schedules inspections as soon as each phase of construction is completed.

Contact us today for your free estimate – and Veterans receive an extra discount!